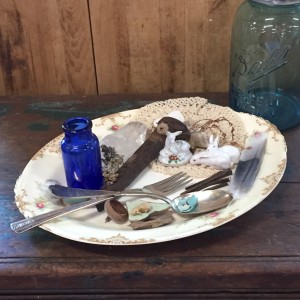 Yes, I am a hoarder of sorts. I collect little bits here and there, I pick things up off the ground, I save dried flowers and dried bug bodies. Rocks, sticks and leaves, bones, broken china and tarnished silver. Rusty, crusty sometimes unidentifiable pieces of a long-forgotten piece of machinery. I cannot resist doilies and hand-painted china. This has been going on since childhood, but I never took the time to think about why these things speak to me, call to me, insinuate themselves into my drawers and boxes and trays and into my home as objects d’art.

As South Main Creative became a cohesive concept, I realized everything tells a story and the story is the lure. Every merchant here tells their unique story through the items they choose to collect, to buy and resell, to make with tender loving care or the sweat of their brows. Considering those stories brought me to consider my own.

I was blessed to grow up an only child in the country. We had horses, cats, and dogs. The cats and dogs were always rescued (or “dropped off”). I witnessed procreation, birth and death. My escape from our daily routine of care and maintenance of our horse ranch was to disappear into the woods. There was on old barn and the remnants of an old homestead on the back of our 72 acres. Hidden in broken-down sheds and an old cellar were mason jars and bottles, cracked china, old silverware. Still flourishing at the front of the abandoned homesite were rows and rows of daffodils that every spring would triumphantly rise up through the overgrown weeds and bushes. I could pick armloads of them and carry them back home to decorate our decidedly depressing brown-paneled trailer house (they were not called mobile homes in those days). I tease my son and tell him I grew up during the depression.

Running East-West through our property were the remains of an old railroad track. Walking along the rise could reveal a rusty railroad spike or a chunk of bubbly iron spewed long ago out of a coal-fired engine. Down from the rise was a drainage creek where I could set up my wooden crates and old dishes and play house. We called the little draw “Copperhead Corner.” I like snakes, too.

I could go on and on about the life-altering sweet and freakish things that happened during those years (maybe I’ll write a book), but the point is I analyzed and discovered what makes me tick. And yes, I’m still picking stuff up off the ground, maybe I’ll do something with it someday.

Have you thought about your collecting/making/nostalgic story?

This site uses Akismet to reduce spam. Learn how your comment data is processed.